In 1981 Harlem Spirituals Inc. introduced a new neighborhood tour that culminated in a lively Gospel church service on Sundays. In the days before Harlem was featured on New York City travel itineraries, this idea for a tour was nothing short of visionary. However, convincing hotels and tour operators to carry the company’s brochures was one of many challenges.

Muriel Samama company president believed that Harlem with such a rich history was a viable tour destination, persevered and continued to promote the neighborhood. By the end of the eighties, she had tapped into a strong overseas market. European travelers showed a great interest in Harlem’s rich cultural tapestry and wanted to visit the epicenter of early Gospel and Jazz movements.

Gradually, Harlem experienced cultural rebirth and developed into a vibrant neighborhood with a growing middle class. In the nineties, Harlem enjoyed a steady economic growth and a booming a real estate market. Soon after, the domestic retail and trade markets took interest in the destination bringing visitors from all over the USA to experience Harlem. As a proud member of the Harlem Chamber of Commerce, Harlem Spirituals maintains a strong relationship with the Harlem community including its churches, Jazz clubs, and businesses. Harlem Spirituals is also a sponsor of the Addicts Rehabilitation Center Choir’s international gospel concert tours. In 1994, Muriel Samama created New York Visions. Like Harlem Spirituals tours, New York Visions tours draw on the city’s cultural abundance and enchanting ethnic mosaic. New York Visions was developed in order to offer tours that venture beyond the boundaries of midtown Manhattan. Moving away from the beaten path, New York Visions tours cover the unique locales of the Bronx and Brooklyn in addition to central Manhattan tours.

New York Visions makes you a part of each city neighborhood by allowing you to walk the streets and soak in the local flavor. We strive to explore the historic and ethnic neighborhoods that showcase the diversity of New York. Whether you’re in Manhattan, Brooklyn, Chinatown or The Bronx, you’ll experience the City like New Yorker. Scheduled daily tour departures for Domestic and international clientele, group packages, airport transfers and other personalized land services allows New York Visions to service travelers from start to finish. Catering to the discriminating traveler’s special needs is just another part of New York Visions’ service-first commitment. Today, the Harlem Spirituals/New York Visions Travel Group is a thriving sightseeing provider and full-service receptive operator run with a personal touch.

Harlem natives with a gift for storytelling.

The Harlem Spirituals/New York Visions Group midtown offices are warm and inviting. The office is open seven days a week and is staffed with multilingual professional service agents. Tours are offered every day in English, French, German, Italian, and Spanish. 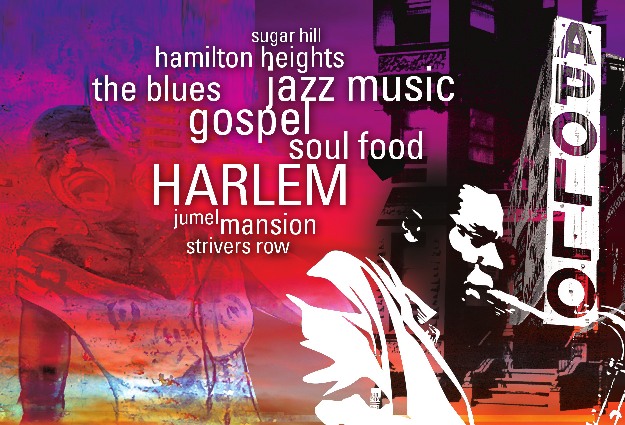